Week 1, Venice and the Grand Design

Venice at the Start of the 16th Century. 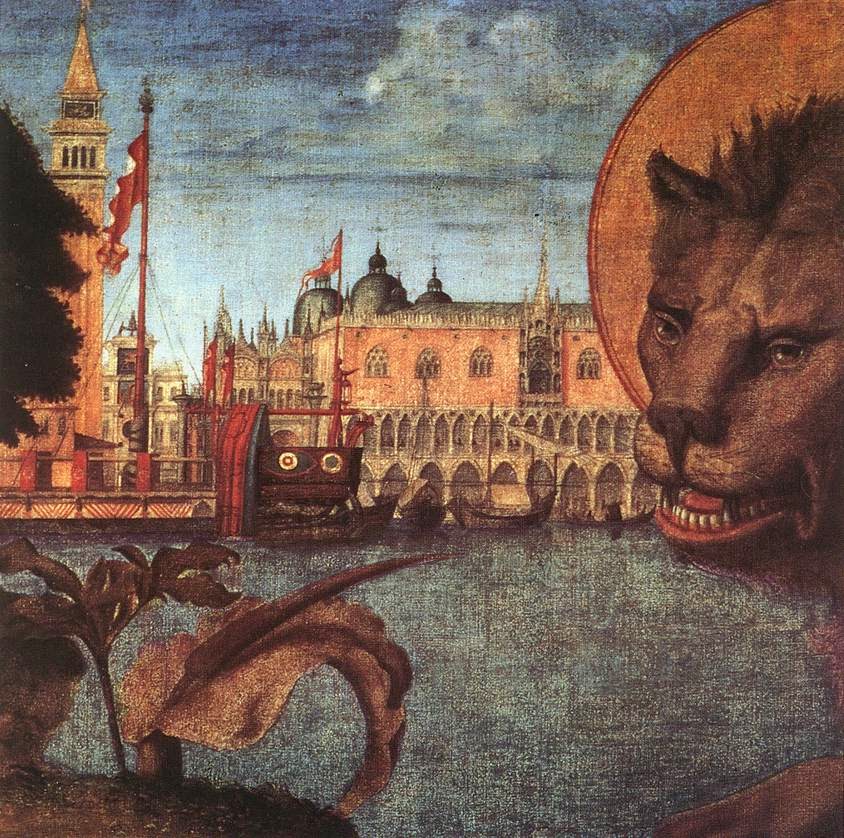 Venice as a city of power and culture really came to prominence in the 16th century during a precarious period for the city. The main reason for Venice’s Mediterranean empire was commerce; many exotic goods like spices, jewellery, drugs, dyes, silks, cottons, ceramics etc were imported into Venice due to the city exploiting the silk routes which we hear about from Marco Polo’s Travels of 1291. To add to these profits, Venice “stepped ashore” as symbolised in Carpaccio’s Lion of St Mark using condottieri (mercenaries) to annex inland dominions that stretched from Udine in the east via Treviso, Padua, and Verona to Brescia and Bergamo from which many fine artists were to come to the metropolis. This militaristic ambition led to fears of Venetian expansionism which were countered by the League of Cambrai headed by the Papal States in 1508. Despite the hostility of formidable princes like Pope Julius II, Venice retained confidence in its power and security because it owned a sea empire stretching down the west Adriatic coast from Istaria to Corfu, and on to Crete.[1]  As Jacopo di Barbari’s famous map of Venice suggests, the city was protected and sanctioned by the god of commerce (Mercury), whilst Neptune symbolised the sea that enriched the city, and who settles in the Venetian lagoon. The Venetians were a sea-faring people as marked by a ceremony in which the Doge would “wed” himself to the sea- see Paris Bordone’s Fisherman delivering the Ring. “We espouse thee, o Sea, as a sign of true and perpetual dominion.”

Painting and Audiences in Venice


Taking pride in a history extending back to Byzantium, the rulers of Venice enjoined painters and sculptors to convey the city’s mythical origins in 1177 when Doge Sebastiano Ziani mediated peace between Pope Alexander III and Emperor Frederick Barbarossa.  Next to the Roman Catholic Church and the Holy Roman Empire, Venice was a “third sword” whose justice and might was celebrated through the gigantic pictorial cycles in theDucal Palace, the engine room of the “Venetian renaissance propaganda machine”which conveyed through art the city and its accomplishments to the local population and the world. Berenson makes the interesting point that the growing diversity in wider renaissance society led to a split between the humanist, literary imagination, (part of the tradition of rhetoric) and the emergence of a more popular style in Venetian painting; the renaissance ceased to be a movement conducted by poets and scholars alone and so painting acquired a new municipal function of instilling pride in the prosperous and peaceful Venetian state. Assuming that Berenson is correct, we could tentatively say that there were many different types of audiences for painting in renaissance Venice. Giorgione’s lyrical allegories clearly reflect the taste of an elite company of scholarly humanists; the Bellini and Carpaccio with their colourful processions and pageants convey something of a more popular taste centred on the festivals. Yet, we must be careful not to simplify, since as  Rosand says, the imagery of pagan humanism and archaeology, the province of Venetian intellectuals, intruded into these popular events so there could be an overlap of high and common cultures mediated through the art. Also, Venetian society was imbued with a corporatist ethos ensuring that everybody, no matter their position in the social hierarchy, worked for the good of the republic. Finally, the overpowering triumphal allegories of such artists as Tintoretto and Veronese might be seen as approximations of rhetorical writings of learned scholars that proclaimed the fame of Venice to the outside world.

The Symbols of Venice. 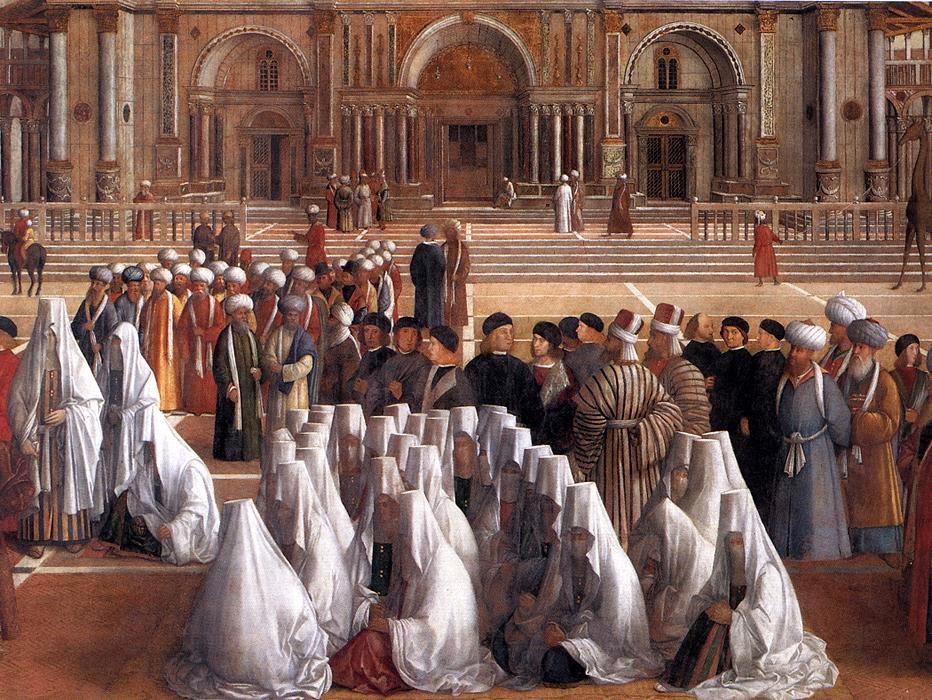 St Mark
The most well-known and oldest symbol for Venice is the lion of St Mark, San Marco.[2]   The Lion of St Mark was called “our San Marco” and it would have greeted visitors from the top of its column in the Piazzetta. In the guise of a lion (forma di lion), St Mark was also the symbol of Venetian expeditions abroad. Significantly, when the League of Cambrai declared war on Venice in December 1508, upon taking Bergamo, the French invaders carried off the large sculpture of the winged lion that signified Venetian rule of the town. Thus the winged lion not only symbolised the saint but also represented the state as in Palma il Giovanni’s Allegory of the League of Cambrai where it is attacking a personification of the League. The iconography of St Mark had a complicated evolution; its earliest appearance might be the Lion of St Mark in moleca, an allusion to its crablike shape; and in some images, the winged beast emerges from one of the four rivers of Paradise in the Apocalypse. Carpaccio’s celebrated version shows a lion passant, a militant beast strutting through the Venetian heartland with the words “PAX TIBI MARCE EVANGELISTA MEUS”, (“Peace to you Mark, my evangelist”) the words of Christ to St Mark in prison. These words were stolen by the Venetians for an imaginary boat trip which Mark had on the lagoon. The most important part of Mark’s story is the removal of his body from Alexandria to Venice by two Venetian merchants, Buono da Malamocco and Rustico da Torcello in 829, best known through Tintoretto’s paintings. Once his remains had been interred in Venice, Mark served as an Italian alternative to the Greek St Theodore and then as a Venetian alternative to the Roman St Peter. As Rosand states, “the patronage of St Mark conferred an independent legitimacy upon the emerging maritime state.”  Sometimes Mark would appear in a normal human form, as in Titian’s plague altarpiece, for St Maria della Salute.


The Virgin
Unlike Florence or Siena, Venice appropriated the image of the Madonna for its self-image. [3]  According to one legend, Venice was founded on March 25th, the day of the Annunciation. On that day in 421, with the foundation of San Giocomo di Rialto, the first stone in the lagoon, Venice was born. March 25th was marked by the Feast of the Annunciation including a triumphal procession of the Doge. Thus the Virgin became linked with the month of March, the “Madonna di Marzo”, as in Bonifacio di Pitati’s altarpiece which has God the father hovering over the Piazza di San Marco in the centre panel with Gabriel and the Virgin in the outer panels. This altarpiece consciously links the iconography of the Annunciation with the city’s public life and the spaces of the city’s rituals. The other main iconographical tradition is the Coronation of the Virgin, of which the best earliest example is Guariento’s which was almost obliterated in a fire of 1577. This type of triptych would culminate in the overpowering splendour of Tintoretto’s Paradise which is an overcharged allegory on the Venetian state that absorbs the iconography of the Coronation of the Virgin within its grand design.
Venetia


Venice is often personified by a young woman, significant because the idea of Venetia Vergine (Venice as a maiden) was often used in written descriptions of the city right up to the age of romanticism.[4] In one of Veronese’s ceiling paintings in the Ducal Place, Venetia Vergine is shown between allegorical figures of Justice and Peace. This is appropriate to the political language of the republic since these qualities were associated with the city. Justice was “the highest civic virtue” (Brown). Justice is first represented in Venetian iconography by a roundel on the Doge’s palace in which a majestic woman holding a sword is seated on the throne of Solomon. Furies symbolising pride are vanquished at her feet and the inscription reminds us she is Venice, not solely Justice- she is in fact Venecia-Justice. The Doge’s Palace was considered a seat of Solomon and there are other references to that wise judge, most noticeably in Bon’s sculptural group, the Judgment of Solomon, perched next to the pigeon spikes at the top of a pillar!  Venice also became a symbol of Peace which was essential for the republic to thrive economically and politically after the turmoil of Cambrai. “Like Justice, Peace was to be a gift of Venice to an embattled Europe” (Rosand).  Venetia is also linked with Olympian gods like Neptune (Tiepolo).


N.B. I'm told that the footnotes look weird when viewed in Internet Explorer. My advice is- don't use IE! I'm using Maxthon for the technically minded.