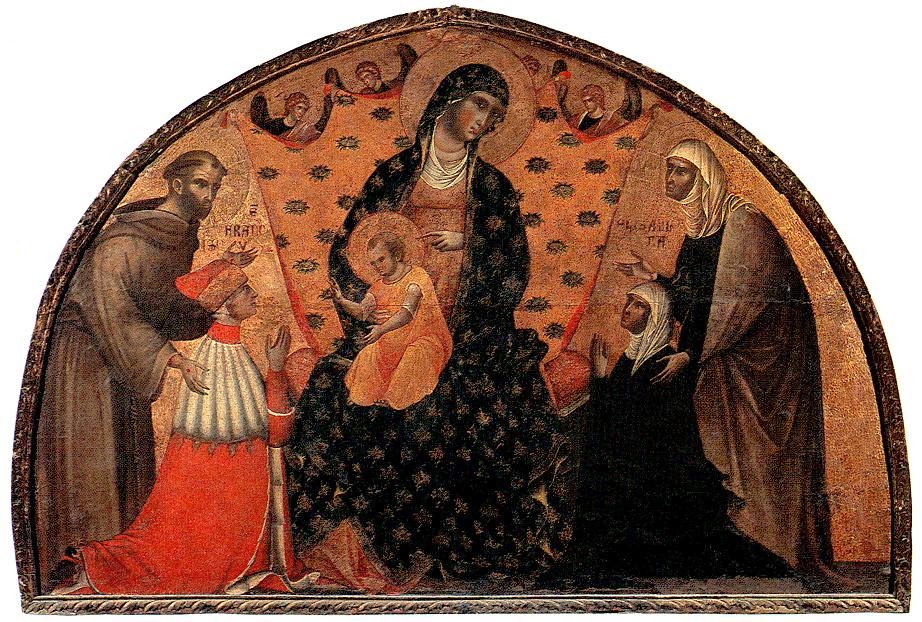 According to the dictionary, the word “portrait” means a likeness that is drawn or painted. Perhaps the first portrait in this sense in Venice dates from 1339: the image of Francesco Dandolo by Paolo Veneziano which hangs over the Doge’s tomb in the Frari.[1] This panel shows Dandolo presented to the Virgin by St Francis, and it may be an authentic portrait despite the stylistic conventions of Byzantine painting which are present (Moretti, 32). This reveals another aspect of portraiture: it can be either naturalistic or stylized, or sometimes both. Dandolo’s face is a portrait, yet some of the religious figures in this picture are rendered realistically too. Now if we place the portrait concept in the realm of politics, we encounter the state portrait. State portraiture was important in Venice, particularly in the form of doge portraits. During Dandolo’s reign (1365-68) a series of portraits of Doges was begun in the Sala Maggiore Consiglio (Ducal Palace); these would be destroyed in the fire of 1577. The originals would have constituted a portrait gallery of heads of state painted by artists from Guariento to Tintoretto. If these are combined with the scenes from Venetian history which contain likenesses of famous rulers, the Ducal Palace can be considered one huge portrait gallery- a history of the republic in which individualised portraits appear. If we “unframe” these portraits from the huge pictorial narratives of the ducal galleries, we are left with the independent portraits which appear during the second half of the fifteenth-century. The greatest examples come from the Bellini firm: Gentile famously painted a portrait of the Sultan, Mahomet II; his brother Giovanni gave the world, arguably, the most realistic likeness of a Doge ever portrayed- Doge Leonardo Loredan, in the National Gallery.


The climate of humanism and scholarship in renaissance Italy provides an alternative backdrop for the Venetian portrait: the aristocratic ideal. Apart from Bellini himself and visiting painters like Antonello da Messina, there exist “small scale portraits” of influential Venetian patricians like the mysterious Jacometto Veneziano’s Portrait of Alvise Contarini (New York).[2] Then there are semi-official portraits which fuse formality and intimacy like Paris Bordone’s obscure Portrait of a Man in Armour and Two Pages (New York). Marking the transition in Venice from the formal independent commemorative portraits of the Bellini and Jacometto to something more consciously elegant and aristocratic in manner are the portraits of Giorgione, and the painters associated with him. Though Giovanni Bellini undertook to portray elegant courtiers, Giorgione infused his portraits with a dreamy romanticism which was not only attractive in itself, but conveyed the idea of litteris servabitur orbis “the world will be saved by culture” (Moretti, 32). Giorgione and other artists like Lorenzo Lotto created a portrait of doomed youth; young men shown with an ardent, latent power unrecognised by the indifferent material world; youths placed in front of symbols like candles suggesting the transience of life. Good examples of the former are the portrait of a young man, possibly Antonio Brocardo, by a follower of Giorgione (Budapest); and for the latter, Lotto’s Portrait of a Young Man (Vienna). Sometimes these figures are shown in a rural setting; the close-up portrait-like format of such pictures as Savoldo’s A Shepherd with a Flute (Los Angeles) combines the aristocratic ideal and Giorgione’s pastorals. Titian learnt much about portraits from Giorgione but he shook off the tristesse of the dead painter and fashioned a more confident, assertive kind of portraiture reflecting the upward trajectory of his own career which is an arc of prestigious commissions. His sitters are the powerful who survey us dispassionately, or possibly with a hint of veiled contempt; we seem to be put firmly in our place by the Man with a Blue Sleeve (London) who literally looks down his nose at us. Titian’s aristocratic portraits give way to the official, sub fusc portraits of Tintoretto which include likenesses of magistrates, senators, and officials of the Doge’s palace: a collective social portrait of the professional classes in Venice, though social distinction communicated through costume is really inaugurated by Giovanni Bellini. With his fusion of portrait and the genre of corporate Venice, Tintoretto created a virtual monopoly that other painters found difficult to challenge. Some by temperament were disinclined to try. His great contemporary, Paolo Veronese, was no face painter; this artist preferred portraits within opulent, extravagant settings; there is the odd brilliant exception such as his independent portrait of the sculptor, Vittoria- see below.


Venice was first and foremost a trading centre and dealers and artists trafficked in art to make their living or supplement the one they had. We have been left a number of high quality portraits of these merchants, antiquarians and artists which provides information about the culture of collecting in 16th century Venice. One of the most famous is Lotto’s Portrait of Andrea Odoni (Hampton Court) who lived in the sestiere of S. Croce in a palace frescoed with mythological figures (Brown). Another famous portrait of an antiquarian is that of Titian’s immortalisation of the numismatist Jacopo Strada (Vienna) who may be offering the statuette of Venus to the viewer- or snatching it back! We can add to this group a marvellously vibrant portrait of the most famous sculptor in late 16th century Venice: Allesandro Vittoria by Veronese (New York); then there is the portrait of an unknown dealer surrounded by sculpture by a painter who may be Palma il Giovanni (Birmingham). Self-portraits were painted as endorsements of the artist’s profession, though the symbolism would inevitably rely upon less commercial and more scholarly traditions in which humanistic learning was celebrated; money and erudition would overlap occasionally. In Titian’s Self-Portrait (Prado), he wears a gold chain which not only symbolises the “links” in the chain of painting leading back to Apelles in the time of Alexander the Great, but also his personal wealth. Venetian links in that chain would have been Gentile Bellini and Giorgione who also left us likenesses of themselves: one showing Gentile as a dignified capomaestro; another, Giorgione as the young shepherd David burning with defiance.


As Fortini Brown says, in Venice women were ornamental, and as a sign of their wealth and opulence they displayed jewellery.[3] Yet this was literally meretricious since mainly of these fine women were harlots and courtesans. It is also known that Titian used prostitutes for models and celebrated feminine works such as “La Bella” which might seem to convey aristocratic respectability and feminine propriety, but there is also something ambiguous about such pictures. Does it relay a “feminine ideal” (Brown) or is it a portrait of an actual woman? A window onto this culture of courtesans is also provided by group portraits in Venice which often serve as allegories of love and meditations on intimate relationships. Apart from allegorical portraits containing a group of people, e.g. Palma and Licinio, there are such intriguing paintings as the group portrait by the Bergamo artist Cariani who evokes a world of beauty, squalor, and lucre in his gathering of haughty courtesans, shifty procuresses and blasé courtiers, all in the same painting.